Who We Are and Why A Brewfest?

We've had lots of questions about who is organizing the Brewfest and what the event proceeds will benefit.

A little history…..Downieville Improvement Group (DIG) started as an informal group of business owners and residents early in 2007 and the focus was promoting Downieville and helping in the community.  At the end of each meeting, we’d pass a jar around for donations to pay for a town project that we’d plan to do.
Eventually, we decided to formalize our group and applied to the IRS to be recognized as a 501(c)(3) nonprofit organization.  Our objective and purpose is “to hold events open to the public; the proceeds of which will be used to make improvements and/or to maintain public owned buildings, monuments, or works in and around the unincorporated town of Downieville, Sierra County, California, in order to lessen the burden of government by reducing the costs of governmental projects, and by directly benefiting the general public."

Our first Brewfest in 2015 was a huge success!  We are proud to say that the Downieville Mountain Brewfest has been one of the largest COMMUNITY fund-raisers in the entire Sierra County.  All proceeds from the event go back into our community, not into a promoter’s pocket. 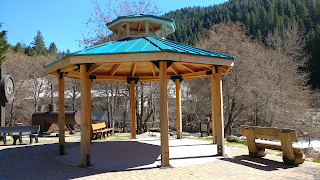 The gazebo in Gold Rush Park was our first major project as a 501(c)(3). We formed a committee to work with the County to build the gazebo and the structure was completed in 2017.  A plaque commemorating the list of contributors has been placed on a boulder near the structure. 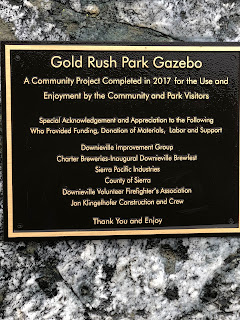 One goal accomplished-on to the next one!  On the top of our list of community projects has been to renovate our Downieville Community Hall.  It desperately needs a facelift! We've been working with the County to get this plan in motion, but it's been a slow process due to several county restraints regarding funding and labor. 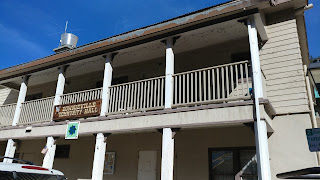 In 2020, Sierra County was awarded funding of $400,000 from a Prop. 68, Local Parks Rehabilitation Creation and Improvement Grant. Half of the funds, $200,000 was allocated to the refurbishment of the Downieville Community Hall which is anticipated to begin during the spring of 2022. In August, 2021, DIG was excited to present Sierra County a check for $70,000 to supplement the Community Hall project funding!  Work should begin later in 2022 or early 2023.
Our current goal is assisting the Downieville Fire District in fulfilling their dream to construct a new firehouse. So besides having a really fun time at the Downieville Mountain Brewfest, your purchase of Brewfest tickets will contibute toward turning these projects into a reality!  DIG thanks you for your support!